Every Winter, the Temple at Firefly starts with a Grant Proposal. On this page are the past few years’ selected Proposals.

Each year at Firefly, a temple is constructed to provide a contemplative introspective space for the community.

The temple creates a space for participants to engage both their civic and spiritual needs. Fireflies can leave writing and offerings and are invited to spend time in the structure to process and contemple the past year’s experiences as well as those of the year to come. The temple is a structure onto which people project their needs and emotions.

On the last night of Firefly, this structure is burned in careful silence and this ceremony carries the weight of all of these things.

Cereus was a celebration of radical transformation inspired by time lapse footage of blooming flowers.

Flowers like the night-blooming Cereus, a cactus that blooms once a year for a single night.

Flowers like the sacred lotus, which opens and closes daily and has been used by many religions to symbolize rebirth since at least ancient Egypt.

Cereus was like the seed pods of serotinous conifers, which need the high heat of a forest fire to begin their next generation.

Cereus was a 20′ ring of twelve platforms inviting participation from all directions that had an enclosed private internal space where messages for the temple were written on strips of canvas and displayed publicly or submitted privately. In the center was the focal piece of Cereus; an orb of wax covered in wicks, suspended from the center of the structure, and anchored to the ground.

Over the course of the festival, fireflies acted as pollinators extending the wicks with strips of canvas. Those wicks were the place of ignition. As darkness fell, figures quietly approached through the silent crowd. Solemnly they lit the central wax orb. Strips of cotton added by the community bearing messages of grief and forgiveness acted as wicks to draw the fire into the temple and begin the structure’s transformation.

As the wax and cotton burned, it melted and dripped down the thick anchor rope while licking flames descended to the private messages in the container below. Long flames lashed upwards through the center of the temple, setting alight the thinner anchor ropes which bound the arms together and releasing the temple into bloom.

As the ropes fully burned away, the radial arms of the temple gracefully pivoted open and Cereus bloomed in silence with flame and grace. The gentle movement and crackle of flames was colored deeply red. The dramatic transformation of structure to movement and flame heralded our own release. The release of feeling and the slow decomposition of Firefly over the coming hours.

The 2019 temple was conceived and designed by Jason Livingston.

Many people have put long hours into making it real including Mihai Albu, Charley Ferguson, Bethany Berkowitz, and the wonderful folks of OrchardStreet and TMPESTOD.

We’re honored that we had the responsibility of designing and constructing a space that means so much to so many of you.

Impluvium – A Temple for the Earth

This year’s temple was designed by Nova Reilly, and built by Nova Reilly & Seth Avecilla, along with a team of regular core volunteers & a vast number of others to whom we are incredibly grateful. We’re honored that we had the responsibility of designing and constructing a space that means so much to so many of you.

Entitled “Impluvium,” the 2017 Temple was envisioned as a “Temple for the Earth.” An impluvium is an architectural feature in the ceiling of a building allowing for rain to flow into a basin below where it is collected. This year’s temple is a hexagon with six segments for participants to enjoy, and an inner central column of space resting beneath an open skylight, allowing for the sun and rain to flow smoothly into the temple’s central “inner sanctum.” The open skylight also frames the sky as its own work of natural beauty to be admired.

Below the skylight is a symbolic collection of vessels resting on an altar. When it rains, they fill and spill over with the generous gift of life-giving water that our environment affords us. Slowly, this rainwater evaporates back into the air, indicative of our give and take relationship with nature.

The alternating vertical and diagonal exterior beams were charred & blackened in the Japanese shou sugi ban tradition. Shou sugi ban- this act of charring wood- is meant to protect against certain types of destructive elements, and symbolizes a barrier of sanctuary and protection inside the temple while also invoking a reminder of the ephemerality of all things and the means by which the structure will soon return to ash and dirt to aid in the growth of new life. The spacing between the beams allows for the temple to appear to merge with the landscape when viewed from certain angles, and then appear to return to its solid form as it is encircled.

In keeping with the shou sugi ban technique used on the temple’s exterior, temple visitors will find small satchels of homemade vine charcoal hanging at each of the six entrances, to be used for writing on the structure’s raw, uncharred interior. Participants may also leave offerings to be burned in between the alternating wall beams, under the raised flooring, and as needed, under the central altar. The roofing and flooring are waxed to aid in preventing mold and water damage during the event, and to facilitate efficient rainflow into the central column. Participants are reminded to be respectful of the integrity of the structure itself, one another’s experiences, and any writing and offerings that others have left inside of the structure. 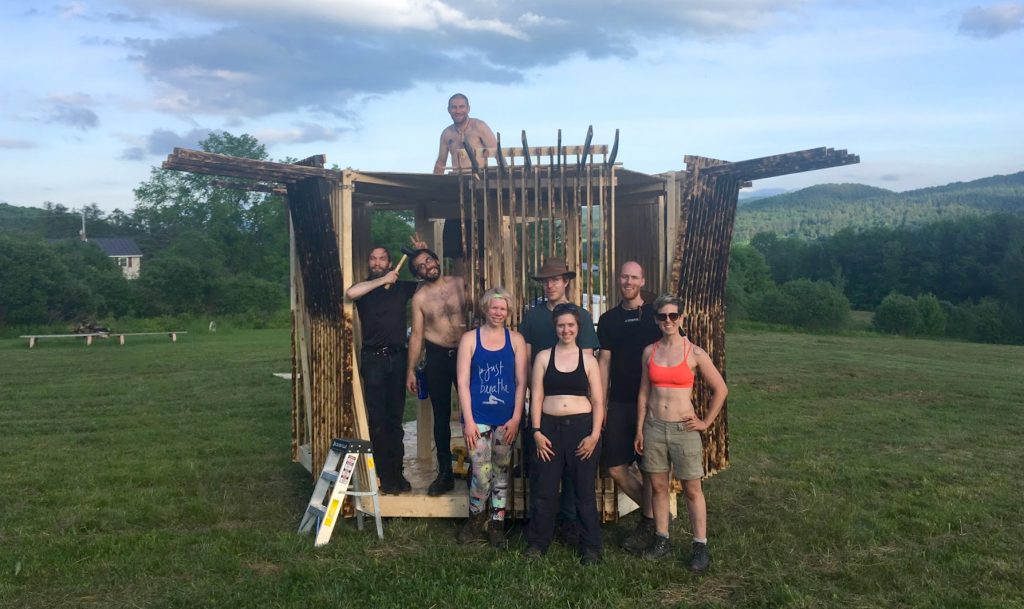 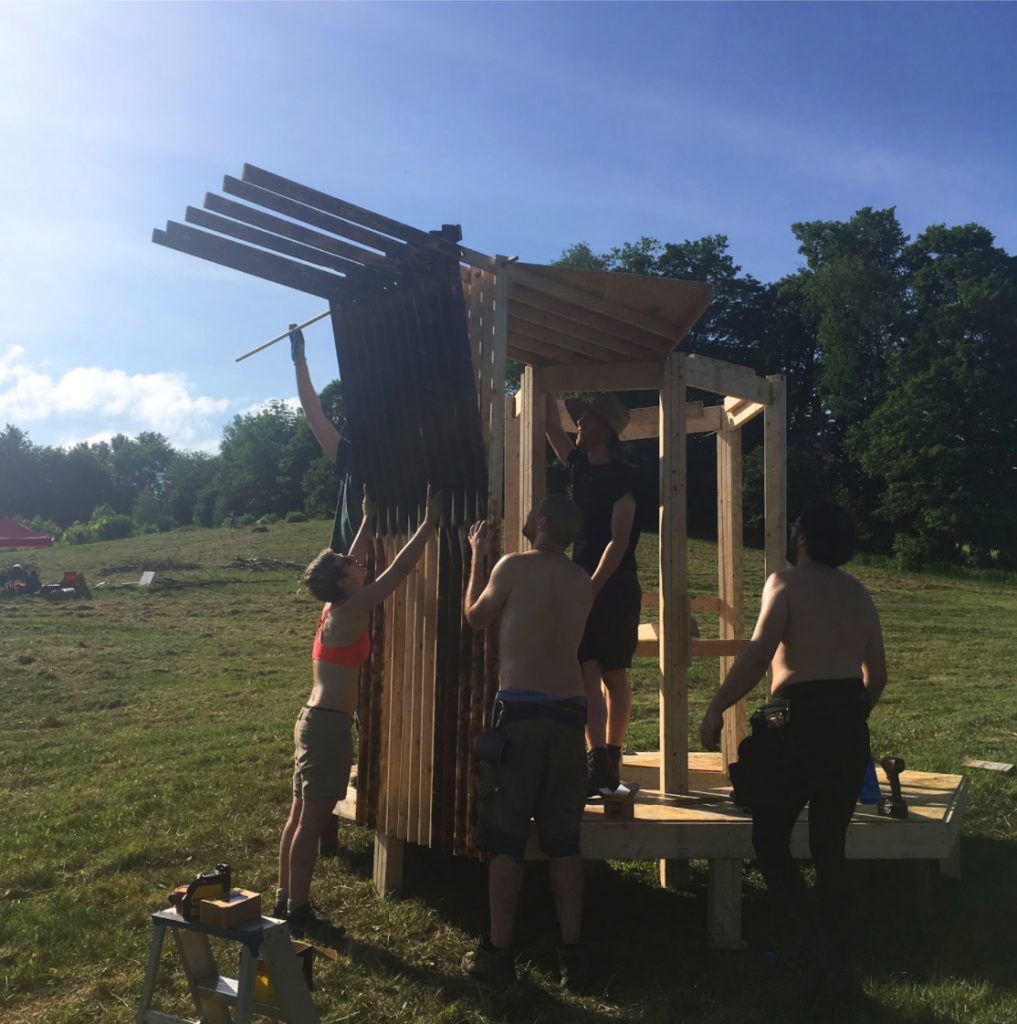 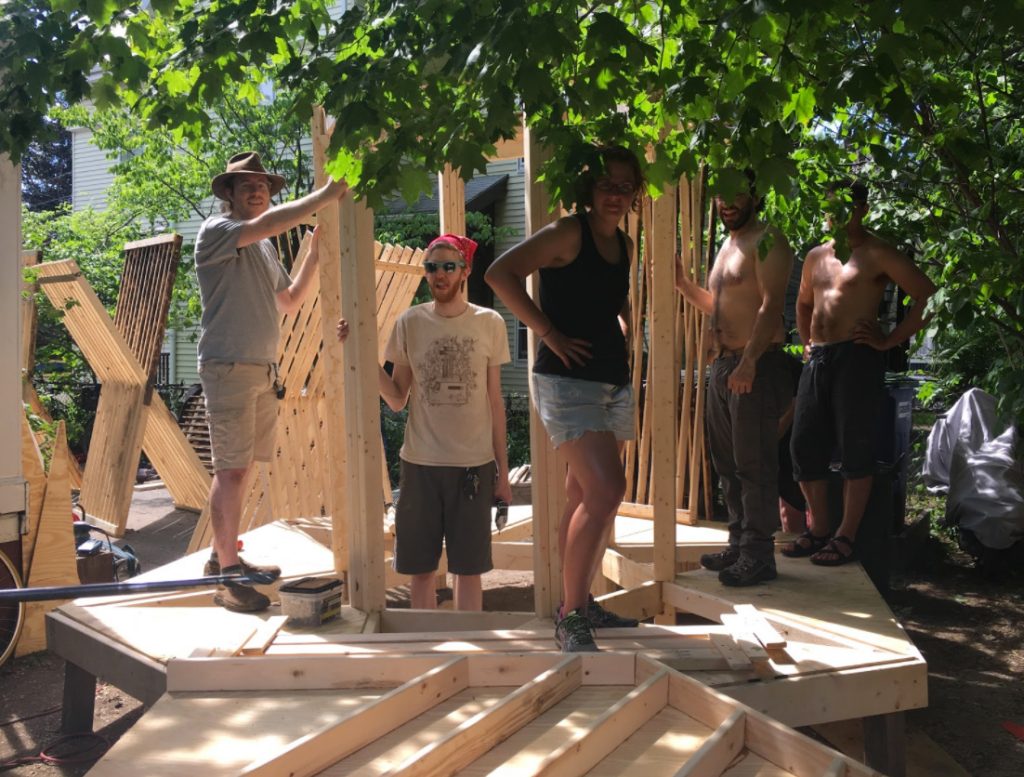 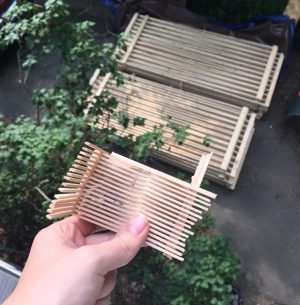 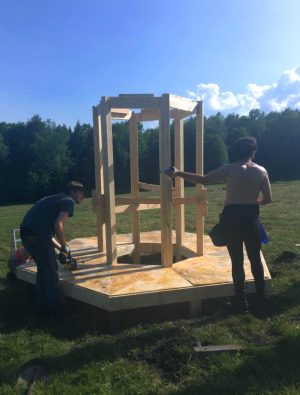 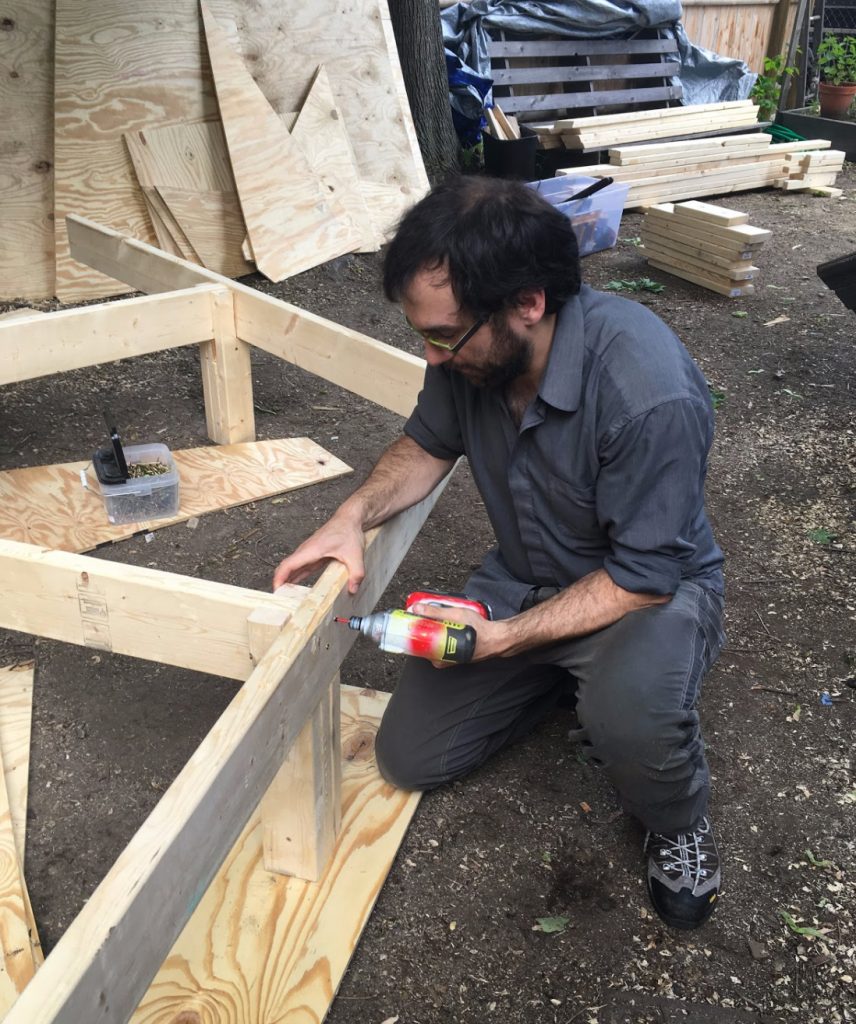 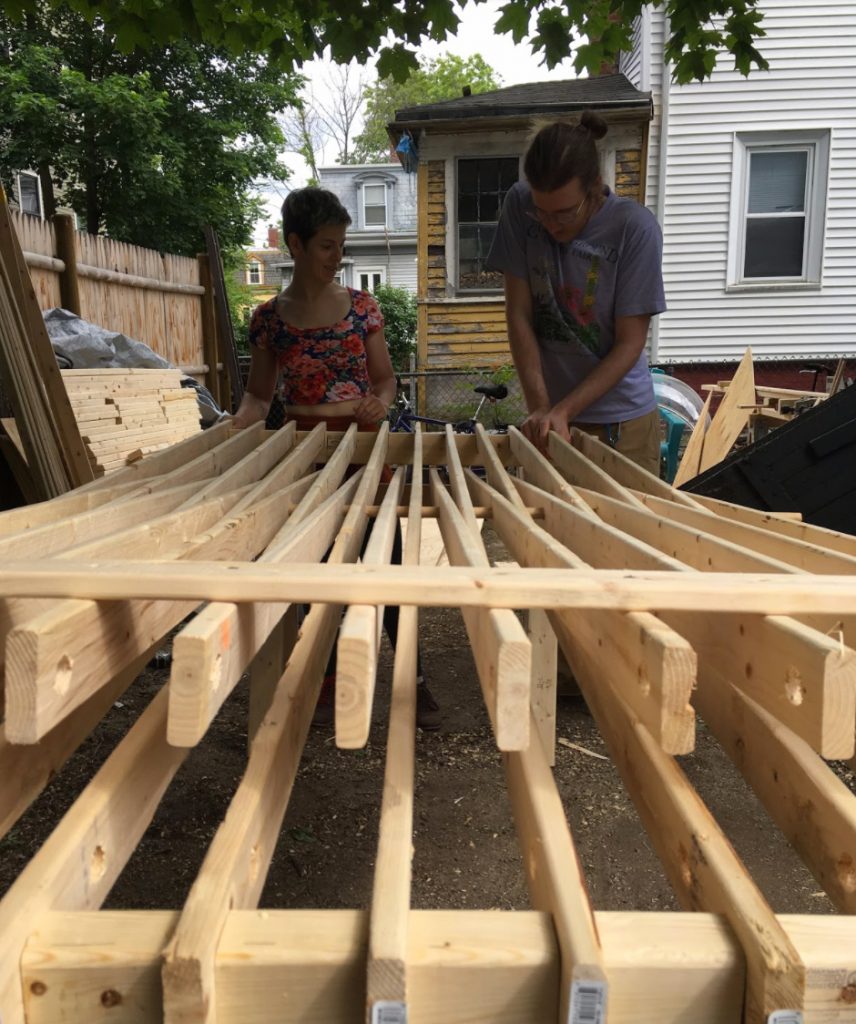 Firefly is you: Join a volunteer Core, make new friends, and help make this the best Firefly ever!
Get Involved
Copyright Firefly Arts Collective 2023 - Suggest website edits
Back To Top